What's in this Guide?

Our sincere gratitude goes to the many HKBU staff who helped us create and maintain this Popular Books Collection.

Theme for August to October 2022

The passing of the all-time Hong Kong novelist and screenwriter Ni Kuang, is a great loss to the Chinese literary world. Ni, as one of the most prolific and popular authors, has published numerous martial arts and science fiction and also penned more than 300 screenplays.  His popular novels include the New Adventures of Wisely Series and the Dr Yuen Series, which were later adopted into films and TV series.

Popular Books Selection Team has hand-picked marvellous works and adapted films by Ni Kuang, and also books by other writers about him. These selections are showcased in our designated bookshelves on 3/F of the Main Library.

Please make a physical visit to the Main Library or take a look at the service guidelines on our Library website. 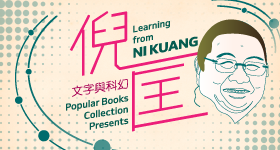 The Popular Books Collection is a frequently changing collection intended to provide recreational and leisure reading for the HKBU community.

We highlight our collection regularly with a particular theme of interests.

We are located on Level 3 of the Main Library at HKBU.